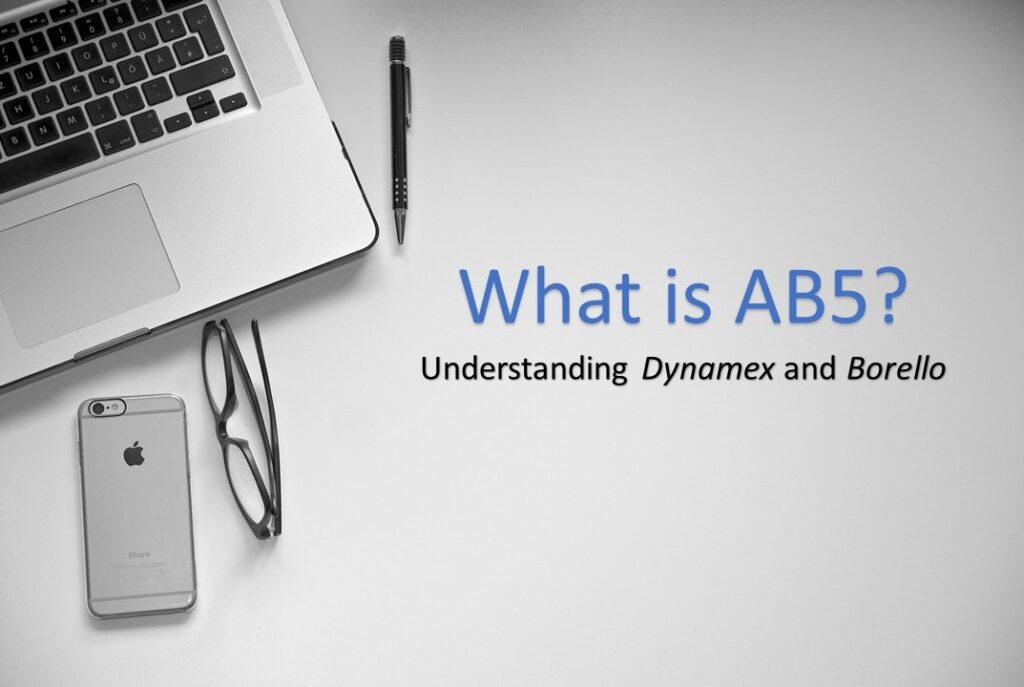 Whether a worker is correctly classified as an employee versus an independent contractor does not depend on whether he is paid with a Form W2 or 1099. “The label placed by the parties on their relationship is not dispositive, and subterfuges are not countenanced.” S.G. Borello & Sons, Inc. v. Department of Industrial Relations, 48 Cal.3d 341 (1989). Rather, it is a fact specific inquiry based on the conduct of the parties. When the existence of employee status is disputed, the law requires certain factors to be met which will dictate one way or another whether a worker is an employee or an independent contractor, these are often referred to as the Borello factors. On April 30, 2018, the California Supreme Court issued a decision in Dynamex Operations West, Inc. v. Superior Court of Los Angeles, 4 Cal.5th 903 (2018) which created a presumption that a worker who performs services for a hirer is an employee for purposes of claims for wages and benefits. California has recently codified the decision in Dynamex into the California Labor Code effective January 1, 2020. However, multiple exemptions exist in which a presumption of employee status does not exist and the Borello factors should be used instead.

Borello involved the issue of whether agricultural laborers engaged to harvest cucumbers under a written “sharefarmer” agreement were independent contractors and therefore exempt from workers’ compensation coverage. The Court, using traditional tests of control and additional secondary factors, ultimately decided that the laborers were employees. This case is the current state of the law in California when the status of a worker as an employee versus independent contractor is disputed. In deciding whether a worker is an employee, the most important factor is whether the hiring party had the right to control how the performance of the work was to be done, rather than just specify the result. In addition to the right of control, the following factors, if true, may show further evidence that a worker is an employee:

It is important to note that no one factor is necessarily decisive, nor should one simply count the number of applicable factors and use the larger number to make a determination. “[T]he individual factors cannot be applied mechanically as separate tests; they are intertwined and their weight depends often on particular combinations.” S.G. Borello & Sons, Inc., supra, 48 Cal.3d at p. 351.

In Dynamex, two individual delivery drivers filed a complaint against Dynamex Operations West, Inc. (Dynamex), a Nationwide package and document delivery company, alleging that Dynamex had misclassified its delivery drivers as independent contractors rather than employees, therefore violating certain labor regulations. Ultimately, the Court created a presumption that a person providing labor or services for money is an employee rather than an independent contractor, unless the hiring entity meets a three (3) part test, now sometimes referred to as the “ABC” test which has been recently codified in the California Labor Code:

Exemptions to AB5 and Dynamex

The legislative intent behind AB5 is to protect certain workers who are intentionally misclassified as independent contractors to the benefit of an employer who wants to avoid obligations such as payroll taxes, workers’ compensation coverage, social security, unemployment and disability insurance. However, certain professional services, construction contractors, business-to-business service providers and referral agencies are exempt from the “ABC” test, instead, Borello is controlling in those instances to determine the employment or independent contractor status of a worker.

For example, if you are an insurance broker; licensed physician, surgeon, dentist, podiatrist, psychologist, veterinarian, lawyer, architect, engineer, private investigator or accountant; registered securities broker-dealer or investment adviser; direct salesperson; commercial fisherman working on an American vessel; real estate licensee or repossession agency, the presumption of employee status does not apply to you and Borello controls. Cal. Lab Code Sections 2750.3(b) and 2750.3(d).

Additional professional services, business-to-business service providers, construction contractors and referral agencies may also be exempt from the presumption of employee status, however, additional requirements must be met. See Cal. Lab. Code Sections 2750.3(c), 2750.3(e), 2750.3(f) and 2750.3(g). The below flow chart maps out the main points of Cal. Lab. Code Section 2750.3 and how it affects the question of whether a worker is an employee or an independent contractor. 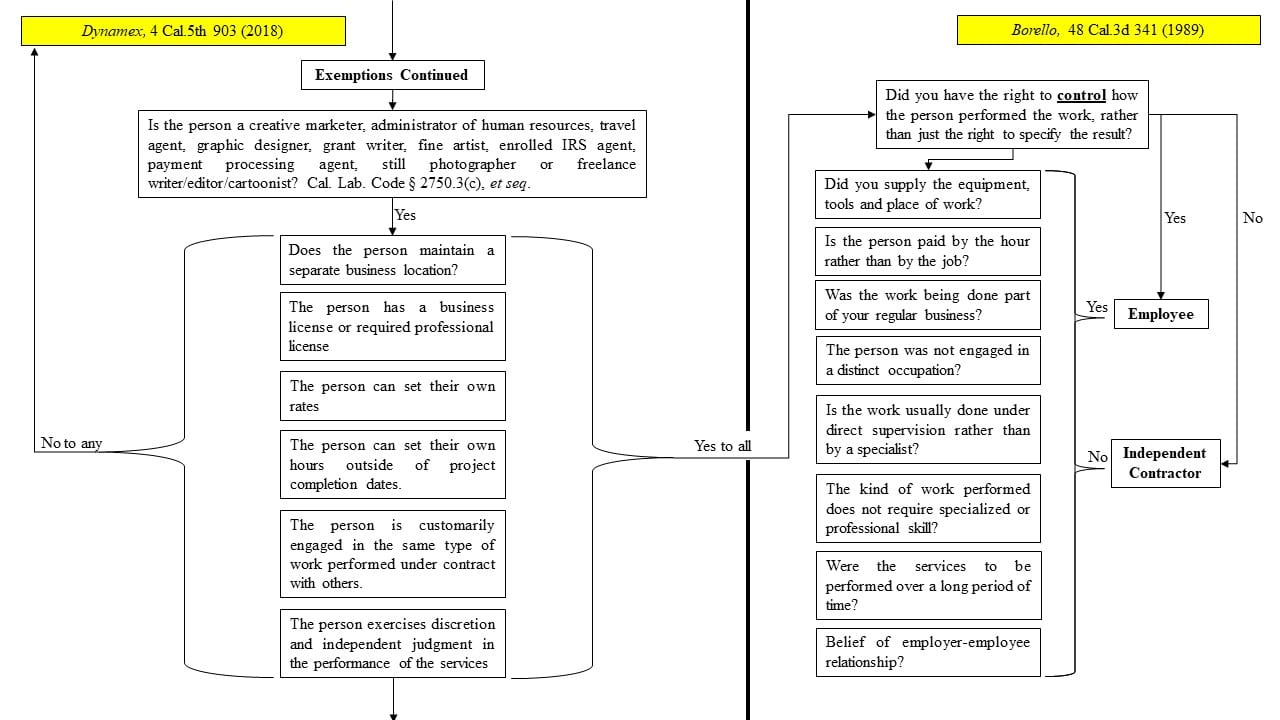 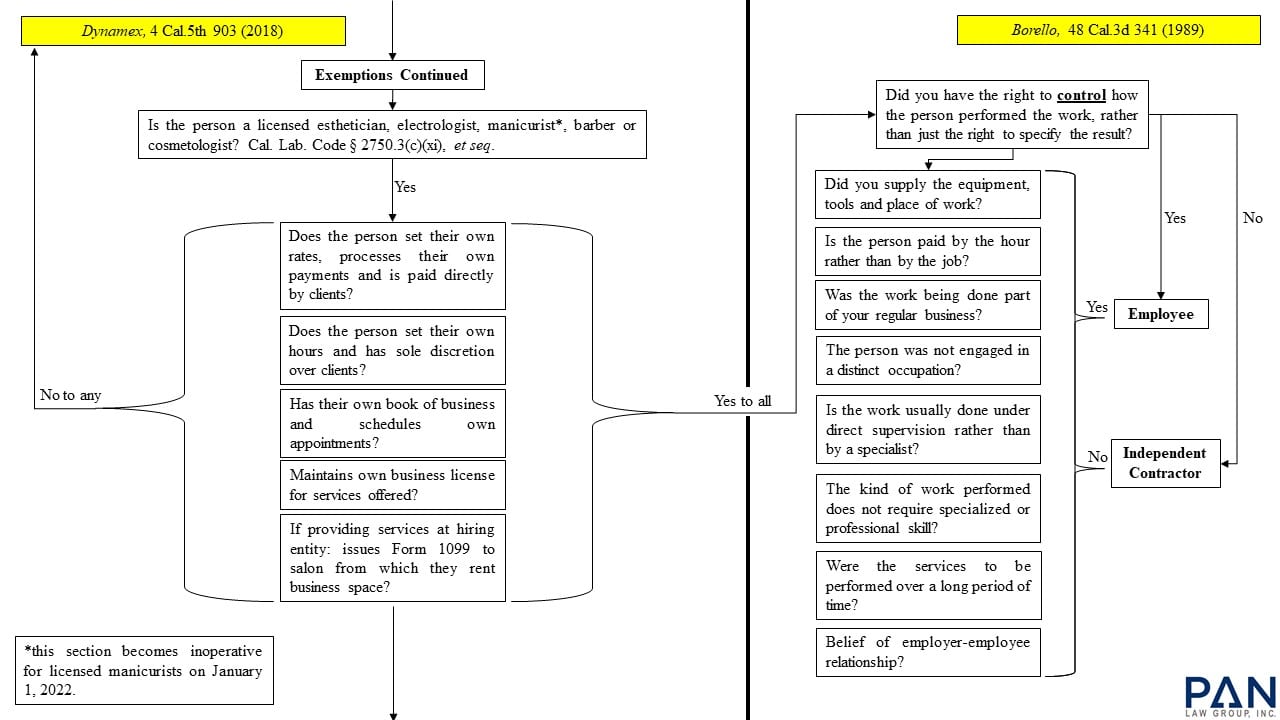 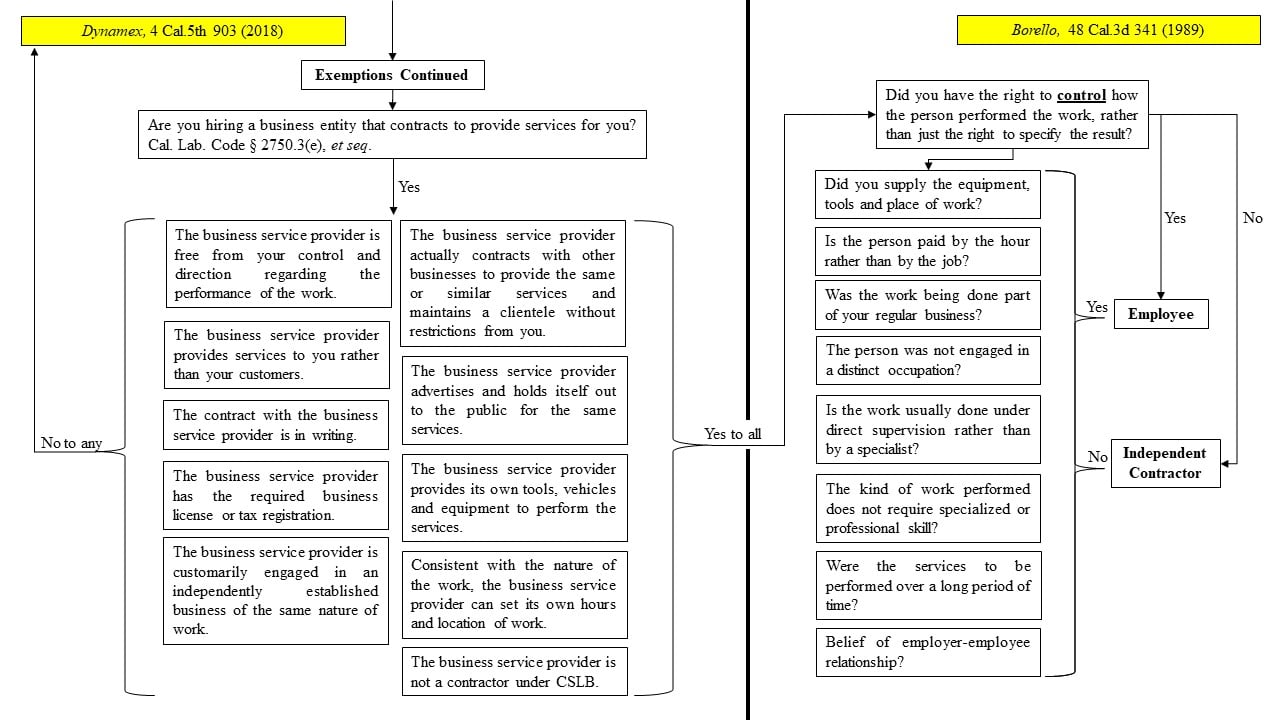 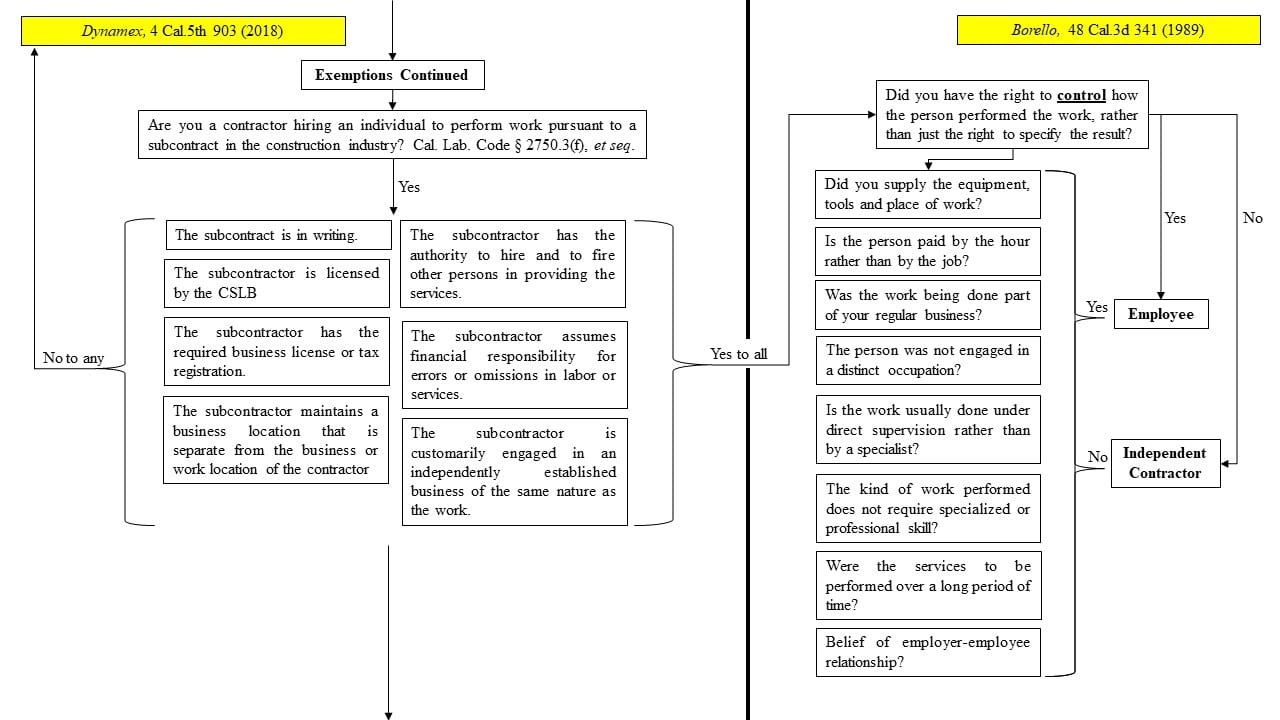 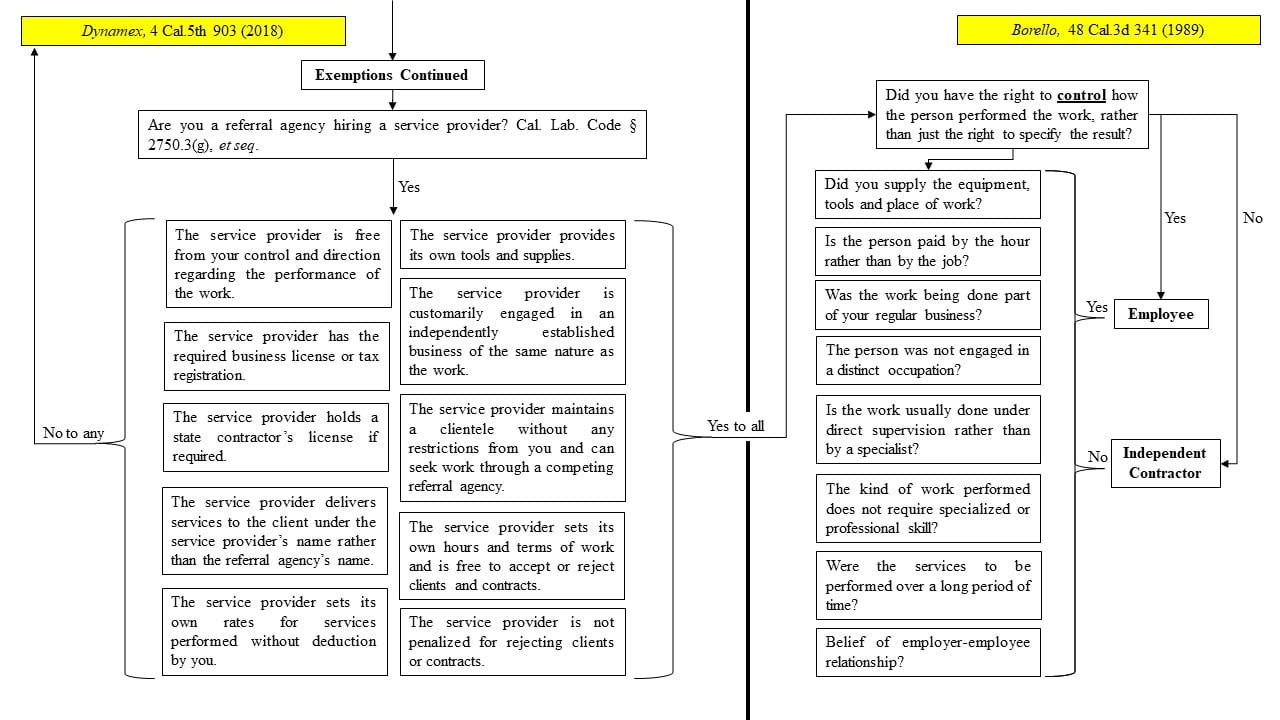 DISCLAIMER: The content above is entirely the opinion of Pan Law Group, Inc. and should in no way be considered legal advice. Please contact us for a free legal consultation if you have any questions. Thank you.